Since it's introduction into Australia in 1924 and the eventual inauguration of the present governing body know as the Australian Clay Target Association Inc (ACTA), the sport has grown to its present strength of approximately 300 clubs with some 14,000 registered members.

The rules and regulations governing the sport are drawn up by the ACTA, with which every shooter must be registered before entering into competitive shooting. With this registration comes the advantage of insurance while on registered grounds, a monthly magazine and a handicap card which enables you to be accepted on any registered grounds around Australia and even overseas.

All competition rounds, with the exception of Double Rise and Deauville Doubles, are shot in brackets of 25 targets. The ACTA has, since the mid 1970's, had an Australia Wide Coaching scheme set up with a National Director of Coaching through State Coaching Directors to Zone Coaches down to Club Coaches. This coaching system is there for use by you - the ACTA registered shooter.

Safety can never be stressed too much, and with the ACTA a firearm is always treated as loaded unless seen to be different. You, the individual, become the safety catch of all firearms and everything else on the firearm becomes a mechanical device. It is therefore essential that safe firearm handling becomes the first rule for all participants.
1. Treat any firearm with the respect due to a loaded gun.
2. Never point a firearm in fun or jest.
3. Carry the firearm so that you can control the barrel even if you stumble.
4. Become the safety catch of the firearm.
5. Load the firearm only when it is your turn to shoot.
6. Always unload when the red flag is shown or at the referee's command.
7. Ensure you have the correct calibre cartridge for the gun in use.
8. Do not play with or modify firearm mechanisms.
9. If a firearm misfires keep the barrels to the front and wait for the referee.
10. Firearms and alcohol do not, and never will, mix.

Safety is your responsibility, not someone else's

1. Club Presidents and Committees are honorary, they respect your constructive criticism and expect your assistance and cooperation.
2. It is your responsibility to ascertain your squad and layout and be on time.
3. While on the tracks, respect the other shooters' rights to perform without interference.
4. In the Trap discipline, do not move from your track until the shooter on your right has shot.
5. In the Skeet discipline, unload before leaving the shooting station.
6. Remain on the layout until the last shooter has finished.
7. Dress in a neat, clean and tidy manner.
8. Respect the referee's decision and do not obstruct his vision.

Down The Line Discipline (DTL) 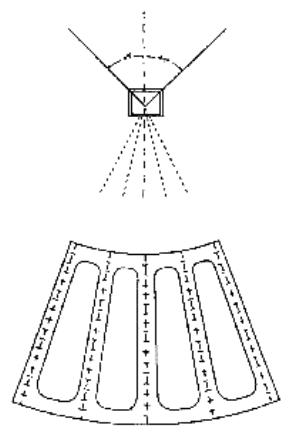 Down The Line Shooting, or "Trap Shooting" takes on several forms, but no matter the variation, they are all shot over a standard measured layout.

This layout is made up of five (5) lanes or tracks that are displayed from fifteen (15) metres (from the target machine) to twenty-five (25) metres, with the lanes tapering towards the traphouse. The most used pad on this layout is fifteen (15) metres, which assumes the title of common mark. However, a handicap system is shot with the individual shooter's ability and skill deciding the handicap meterage.

Procedure:
In Down The Line Shooting, the targets are thrown from an above ground traphouse which is in front of the tracks. This is done by an oscillating machine which is released electrically by a voice command system on the shooter's command of "pull". The targets are thrown within an arc of 22 degrees right and 22 degrees left of a centre line taken through the centre of number three (3) track.

The distance is set to attain a predetermined height and distance. Therefore the shooter knows the height and distance that the target can attain, but not the angle the individual target will be released on when the command "pull" is given from a single oscillating machine. It is the unknown factor that makes the discipline of Down The Line Shooting challenging and exciting.

American Skeet is the standard variety most shot within Australia. This discipline is shot over a standardised eight (8) pad system, set between a High and Low traphouse. This semi-circular layout starts with number one (1) pad at the High House through to number seven (7) pad at the Low House. The number eight (8) pad is set midway between the flight line of the targets. Skeet is shot in brackets of twenty-five (25) targets, but with a set program from pad to pad. Each competitor knows where the target will appear from, going to and what speed it will attain. The challenge is the constantly changing angles, with neither left or right handed shooters having the advantage at the end of the round. 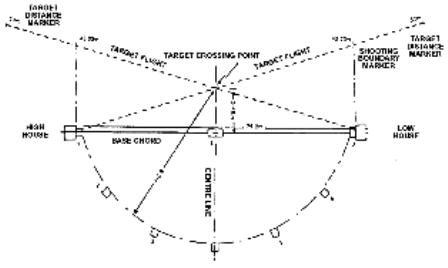 Unlike DTL, only one (1) competitor occupies the shooting pad at any one time, completes that sequence of targets and ensures the shotgun is unloaded before leaving the pad to allow the next squad member to compete. Skeet shooting is a constantly changing angle of targets, and the competitors ability to learn and maintain a smooth action is what makes this discipline challenging and exciting. 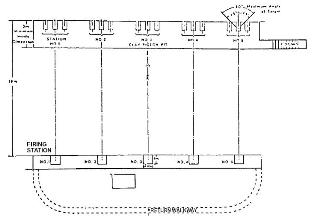 ISSF Trap, or as it is more commonly known "Trench", is best described as the Olympic Discipline of Down The Line. This style of shooting has a high degree of difficulty, is challenging and can be very rewarding. The ISSF Trap over each bracket of twenty-five (25) targets is a fair and equal competition, for at rounds end all competitors have shot at the equal style of targets. This layout is a five (5) pad system, but only 15 metres is used and set straight across the rear of the ground level trap house. Inside this trap house are 15 machines set in five (5) banks of three (3). Each machine being set to a predetermined height, angle and distance, called a program, varying from machine to machine.

Procedure:
In ISSF Trap the shooters are usually in a squad of six (6) and using a rotation system call for their targets by a voice activated microphone. This system is controlled by a computer that scrambles the target program so no individual can anticipate which target will be thrown. The target angle is unknown, 0 degree to 45 degrees, the heights varying 1 metre to 3.5 metres, set at 10 metres from the machines, and the distance thrown also varies 70 metres to 80 metres. With these factors making for a high degree of difficulty, two shots per target are permitted. A round of ISSF Trap is twenty-five (25) targets, but generally shot as competitions of 100 targets. As with DTL, squad members move across the five pads until reaching Pad five (5), and after emptying the gun then proceed around the rear path until reaching Pad one (1). Rotation is then restarted until the bracket of twenty-five (25) targets has been completed. The referee in this discipline indicates a hit target by silence and a missed target with a blast from a hooter. Targets may vary in colour but as a general rule are fluorescent orange. 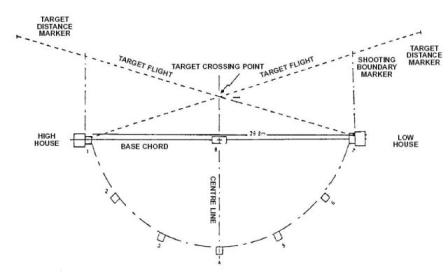 ISSF Skeet is the second Skeet Discipline shot in Australia, but the style is participated at World Cup and Olympic level. Like Skeet, the rounds are shot in brackets of twenty-five (25) targets, but from this point there is little similarity. For although the ground layouts are the same distance, the targets thrown are quite different in speed. Three other differences that become visible are gun position, time delay on target release and the sequence of target release. The gun is held in a down position where the toe of the stock must touch a mark on the hip until the target visually appears. This position is held from the command "Pull" until the targets appear, which is within a time delay of 0 seconds to 3 seconds. All these variations with the ISSF Skeet make for a higher degree of difficulty.

Monocular - One Eye, Binocular - Two Eyes
A question often asked in Clay Target Shooting is whether to use one eye or both eyes. The question should be, do I have a dominant eye? Or, can I use both or only one eye? To quickly check if one eye is dominant or both are equal, try a simple test. Point an index finger at an object with both eyes open. Close first the right eye then repeat with the left. If the finger stays on the object with either left or right only that will be the dominant eye. If movement appears the same with each then your eyes are equal. The advantages of having binocular vision is that your peripheral vision is increased 50 per cent and you are able to gauge depth and distance more accurately. The disadvantage of monocular vision is having to be more aware of the target and careful with stance so as not to further reduce the field of view. As shouldering a gun becomes a habit through practice, it is not too difficult, in the early stages, to change shoulders if the dominant eye so dictates. However, if it is too difficult to change then the more practice and learning to compensate by closing or squinting that eye just prior to shooting is next best.

The information contained in this Introduction has been designed to give a basic insight into the many aspects of clay target shooting. From this starting point it is recommended that a copy of the ACTA Shooting Rules be obtained and read so that all aspects of shooting, safety and etiquette become familiar. Improved shooting skills and correct shooting techniques can be gained with the assistance of a coach within your club. The Club Coach is part of a larger team dedicated to help all Australian Clay Target Association members. To obtain further information on a Club or Coach within your area, click here to go to the Club Lists for each state.